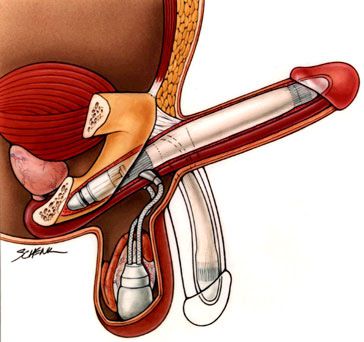 If erectile dysfunction (impotence) is not treatable by other ways, last resort is penile prosthesis. Penile prosthesis are silicone pieces inserted in the male genital organ. They are inserted through an incision on the penis on both sides. Prosthesis is not visible from the outside.

What are the advantages of penile prosthesis?

Penile prosthesis is installed in men having erectile dysfunction (poor hardening of penis) if other treatment methods were unsuccessful. Patients with penile prosthesis will not have any issues with erection (hardening) in their sexual lives and keep the same performance in their lives with aging.

Normal ejaculation occurs during a sexual intercourse and men can easily ejaculate. Patients naturally enjoy the process and sperm ejaculation continues as the same way before. If they wish, they may have a child.

As penile prosthesis is inserted inside the penis during a surgical operation, it is invisible from the outside, and woman does not feel it. A man can use it for sexual intercourse without any preliminary preparation and difficulty.

What are types of penile implants?

There are two types of prosthesis:

Inflatable prosthesis are available in two- and three-piece types.

Inflatable prosthesis harden within few seconds after touching it, when penis is down and soft.

Rods are installed inside the penis. That is why penis can be bent up and down. Very simple to use. 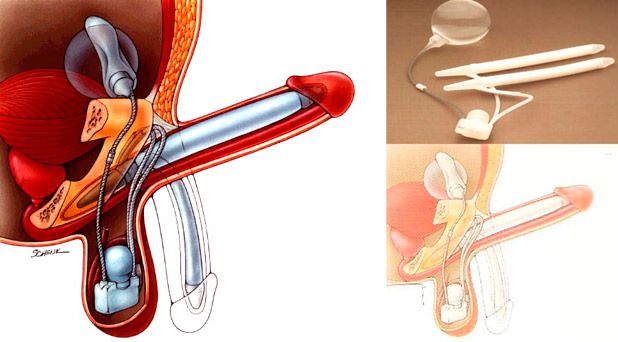 As the name implies the prosthesis consists of three parts. A reservoir with water, a pump (button) actuating the inflation and tubes inserted into the penis. Prosthesis do not affect the penis size.

Nowadays, penile prosthesis is very common in the world and successfully applied. Satisfaction of 95% of women made scope of the operation even wider. Penile prosthesis holds the first place among the andrology operations in the USA.

How penile prosthesis operation is implemented?

Penile prosthesis is a last, but a correct remedy. There is no need for additional post-prosthesis treatment and it is reliably used lifetime. Manufacturers provide lifetime warranty.

A citation from Prof. Dr. Atesh Kadioglu, employee of the Istanbul University and Head of the Turkish Association of Urology:

"I have enjoyed my health again after 5 years"

I was 58. Last five years I had issue with hardening. Urologists told that this is the result of my 10-year-old diabetes mellitus. Two years ago, I unsuccessfully tried Viagra. Urologists offered other treatment solutions. At last, I had decided to choose penile prosthesis. After the operation, I did not face hardening challenge. My orgasm remained unchanged and continued as before. After five years, I have enjoyed my health again. My wife and I are very happy.